I have been searching for the best enclosure since I got my printer. I debated about making it from scratch with my favorite stuff, creform. I started that and made a frame and have been using that for my printer table since I got it.

I debated about using a server cabinet and making it with that. I looked at metal cabinets, I looked at fire cabinets anything I could find but I couldn’t find the dimensions that I wanted. I was browsing Facebook Market place one night, which honestly is the only reason I use facebook at all and I saw it. I saw what would become my 3d printer enclosure.

Now I am not your crazy coke collector like some. But I do collect some Coca-Cola stuff. There it was staring at me. Coca-Cola Fridge $200, need it gone asap. The ad said that it would work if a switch was replaced, I did not really care if it worked because I didn’t need it cold, I need it to keep in the heat. Looking at the pictures I had a feeling the dimensions were right but it ts hard to tell from a picture. So I asked the very nice lady to get me some inside dimensions of the fridge. I waited for the message back with great anticipation. She sent me back the inside dimensions and eureka it will work and I started negotiating, if that is what you call it. I offered $100 for the fridge and she said if you can pick it up today that is fine. Done and DONE. I drove an hour and picked it up.

I got it home and plugged it in to find that it actually did work, the compressor comes on, the lights come on, the defog works. But it kicks on and off a lot.

On to making it into a printer enclosure. 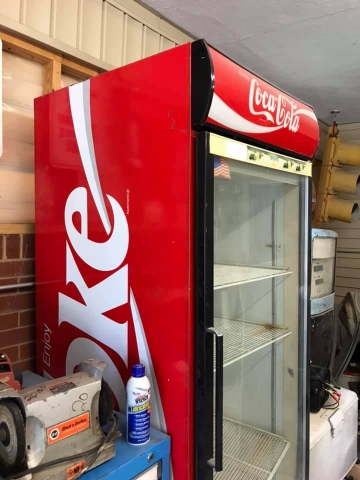 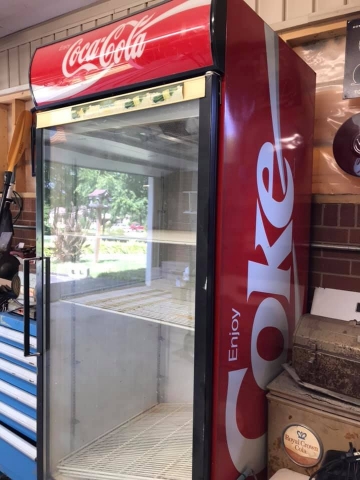 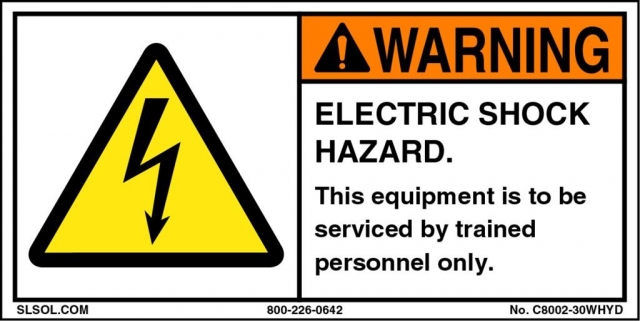 So the first step was to clean the fridge out, it had been sitting in a garage and had some rust stains in it and some of the pictures still show some of it but I cleaned the worst of it out. The top area where the fans are needed blown out real good as well.

Now at some point in all this I thought, but what if I want to turn it back into a fridge, I should find a way to modify this thing without changing much so that I can turn it back into a fridge at any point in time. So what did I need to do. I needed receptacles inside the box to plug everything in. I wanted the original lights to come on but the cooling portion not to work at all.

I will preface this again with a warning. I have worked with electricity, electrical and wiring for a very long time. Working with electricity is DANGEROUS to both you and your equipment, if you are not familiar with or even the slightest bit leery of your capabilities, STOP, find a professional. These voltages can cause serious injury or death. This instructable is meant to be a guide to those that are familiar with this kind of thing and I will not be liable for any damages to you, your helpers, your equipment or tools from improper knowledge or usage.

With that out of the way, lets again start tearing things apart. First I plugged in the machine of course to see what occurs and where the power goes to.

I removed all of the shelves in the machine and lifted up on the rear guard to find the power wires that come into the machine.

I had to remove a drain hose in order to get the cover out completely. Doing this also showed me where I am going to run my power wire in.

Then I found a few screws in the top inside of the machine to pull down the area with the switches and fans. SO I pulled those out and started testing with a meter. Again the machine currently has POWER be CAREFUL.

The following pictures represent what I ended up unplugging to make the the cooling part and the fans stop working while leaving the lights on. All of the connections are spade type terminals. For the time being I covered them up with electrical tape but will go back later and use some heavy duty shrink wrap.

Step 3: Getting Power Into the Box

Now remember my previous warning about electricity, if not back up a step. We are going to work with it again.

Now I need to get an outlet into the box, with that I want the power wire for the lights to go into the box so I can do some neat stuff with it later.

Remember the hose that I unplugged from the top that I previously talked about, Well I pulled that all the way out of the bottom to reveal an easy path to run a power wire in.

I ran both the Fridge wire and the new power wire inside of the box through this hole.

I put a male plug on the power wire for the refrigerator and a female receptacle on the wire that is going to plug into the wall.

Just to make sure I did it right I plugged them in together, and everything works.

So now that all the electrical is done we need to fix the shelf. The wire racks that this thing has are pretty strong but a little springy. I figure with the printer that this is a bad thing. So we take some measurements of the shelf and for the time being cut a piece of plywood to go into the shelf.

Then we are going to fasten the wood to the shelf using plow bolts, some washers and nuts. From the bottom up I drilled 6 holes through the board to put in the bolts. Then on the top side we countersink the holes.

Pop in the plow bolts and we are good to go with the shelf.

Next we figure out the height. Because there a higher space in the center we don’t have to make the shelf as low as I thought which is kind of nice because I wont have to crouch to get prints off the bed.

Originally I designed some holders in Fusion that I was going to use 3m VHB tape to stick to the sides. But the print time was WAY too long. So I ordered these off of Amazon, they are really hard to find because I did not know what to call them. They install right into the rails that hold the shelves.

YAY I get to use creform. Ok just a little piece but it is what I made all my filament holders fit so we gotta use it. But to make it fit nice on the brackets that I bought we need to make a 3d print and bolt it to the brackets.

I fired up Fusion 360 and got to designing.

We bolt them up and pop the creform piece in and bam filament spool holder.

I am probably going to design something else for this because it is a little shaky and they stick out to far towards the printer but they work. I have two other versions designed that moves the spool holder back towards the wall a little bit. Hopefully one of those works better.

Step 6: Install the Printer in the Fridge

Now we just need to install the printer into the fridge and run the wires to the bottom.

For right now I put the octopi on the control box but I think I need to position our OctoPi away from the heat a little bit. Maybe run it down to the bottom. I might end up putting the octopi outside of the enclosure.

I may also buy some extension cables to run the control box further away or even outside of the enclosure. I would have to drill holes in the fridge for this though.

For now until I can find or print a better way the camera sits on the control box.

I run Samsung Smartthings to control some of the aspects of our house. I figured I could incorporate this into the cabinet. To do this I got the Zooz Z-Wave Plus S2 Power Strip ZEN20 VER. 2.0. I actually had my printer already using this but was only using two outlets. One for the printer and one for the light above the printer table. Instructions for using the ZEN20 with smartthings is provided by the manufacturer.

The first outlet we are going to plug in the printer to.

We also purchased a safe Golden Rod Dehumidifier. to plug into port 2.

Then of course we have the cabinet light that needs to be plugged into number 3.

I also purchased the ZOOZ Z-Wave Plus 4-in-1 Sensor ZSE40 VER. 2.0 to measure the humidity in the cabinet. Since humidity and filament don’t mix we can measure the humidity then automatically turn on the dehumidifier to lower the humidity if it gets above a certain level.I ordered one of these and it came dead on arrival so unfortunately I have to wait for a replacement.To tell you how this all works and if the goldenrod removes any humidity.

Then I can also turn on my printer and remote in from any where but honestly I don’t print if I am not home.

Now that it is done I really like it but with all projects there is always room for improvements or modifications.

It holds heat very well, and it also reduces the sound. In addition I don’t have the smell of melted plastic as bad.I have already ran an XYZ cube and it came out really good.

If I was not trying so hard not to modify the fridge it could have been way easier. I will tell you this, this thing is TALL, it barely fit through my door ways. And it is HEAVY. I have some corner furniture movers that only pick things up about and inch off the floor so that made it a little better. It is 30″ wide so it fit through the main doors fine but the interior door had to come off to allow the fridge to pass through.

I already mentioned needing to get the octopi and the control box out of the hot box. These things will occur later for now they will be ok.

I also want to put in some kind of air filtration system. Most likely an activated charcoal system that will clean the air inside the unit without needing to vent to the outside.

I considered putting a heater inside the enclosure to preheat the entire thing but honestly after running my first print which took 40 minutes I do not think we need to do that. We will leave the heat out for now.

I am also going to add in some LED strips that can be controlled with the octopi.

I hope you all like my Coke printer and maybe it will help someone else along the way. Thanks for reading.